We can prevent chameleon Knute Buehler from becoming the Republican nominee in Oregon’s Second Congressional District Race. But we can only accomplish this with the hard-and-cold realization that we Republican conservative CD2 voters, as individuals, don’t necessarily have the luxury of voting for our own personal-pick conservative candidate. We must instead, focus our votes on the single most conservative candidate who can win. (And of course some of us have, intuitively and logically, already selected that particular candidate.)

NOT voting for faux-conservative Buehler is not enough to save the district.

If we get caught up in the standard he-said/she-said quibbling about the various conservative candidates – note there are ten total in this race – we’ll forget about the outcast “moderate” Knute Buehler… standing there inwardly smiling, waiting patiently for us to split our huge CD2 conservative voter block into fragments. If we bicker amongst ourselves, we’ll hand him the nomination on a silver platter as he wins the nomination with less than half the total vote. 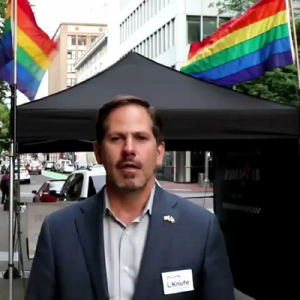 With a little help from his friends, it happened for Buehler in the 2018 gubernatorial primary race. Now, he’s counting on it happening again here in this 2020 congressional primary race.

Who, you ask, is the “preferred” conservative candidate? We’re not sure yet. We’ll have a recommendation for you after we’ve carefully unraveled some behind-the-scenes intrigue, and after we get our scientific poll results* back. We should have a recommended candidate by April 27th, two-days before ballots are sent out.

Here’s a key to keeping CD2 Republican: our organization, MOGA2020, has over 26,000 online subscribers within CD2, and with our endorsement and ensuing publicity, we can significantly contribute to securing this truly conservative nominee. If you join us, it’s my bet that together we can channel an additional 10,000 to 15,000 votes to the endorsed candidate. That would be plenty….

Whomever earns our endorsement, we hope you’ll join us.

And you ask, if we have a truly conservative, qualified candidate, would he (all ten are males) defeat the Democrat in November? Yes. No brainer. We’re talking about the Second Congressional District here, with Republicans out-numbering Democrats by 11%.

Yet if Knute Buehler becomes the nominee, he will easily be defeated in the general election, delivering our district to his Democrat opponent on a silver platter. That will sew things up for the Oregon Democrat progressive ruling class, making all five congressional districts in Oregon, Democrat. (I’ll tell you below why Buehler would be bludgeoned in the general election).

In any election – no matter the political party affiliation – half of voters are not paying much attention. Distracted and with short attention spans, this huge voting block goes with name-recognition and real-time mass-media. In our CD2 Republican primary race, these “low-information” Republican voters are Buehler’s constituency! With this segment he’ll have plenty-enough votes to win the contest if the other half of us, you and me – the serious, I’m-paying-attention conservative vote – is divided.

THIS is Knute Buehler’s twisted pathway to the nomination!

So, this time around, let’s learn from the past and forego our candidate-of-choice and settle for the best of the three competitive conservative candidates.

Who are these three conservative candidates who lead the pack in fundraising and media attention? Jason Atkinson (Medford), Cliff Bentz (Ontario), and Jimmy Crumpacker (Bend).

And yes, there are seven other conservative candidates, but it’s our guess they will add up to less than 5% of the total Republican primary vote. Nevertheless, that 5% represents a fourth segmentation of the conservative base…

(The wildcard in this race? There is almost certainly a vote-split scheme, e.g. the 2018 gubernatorial primary race. We’re untangling the intricacies of that right now.)

Before I explain further, here’s a nutshell analysis of Knute Buehler’s past positioning.

Three months ago, Buehler rechristened himself a classic conservative. This is in glaring contrast to his 2018 gubernatorial campaign when he identified as a “new kind of Republican.” He was “a new kind” alright: big-government, pro-gay marriage, “common-sense” Second Amendment, and a proponent of leftist climate-change legislation.

Since 2016 he has been viscerally anti-Trump…and in his 2018 gubernatorial campaign, he almost gleefully middle-fingered the Oregon Republican Party Platform.

Three months prior to the 2018 gubernatorial general election, he proposed spending $50 million in tax-dollars on the “homeless,” when simply enforcing the law would of course solve the problem. And no small thing for CD2 voters, he was adamantly pro-choice…until just three months ago.

I will digress for a moment because we at MOGA2020 are perplexed: as of this posting, just two-weeks prior to ballots being mailed, NONE of the three viable conservative candidates noted above have even mentioned Buehler’s elephant-in-the-living-room hypocrisy!

In any case, Buehler’s personal reinvention as a conservative has been a jaw-dropping mix of audacity and arrogance. Diana and I continue to roll our eyes and shake our heads.

If Buehler wins the Republican nomination next month, why will he will lose the general election on November 3rd? Three reasons:

Second, more importantly, it’s about character. He’s a mercenary feather in the wind. Buehler’s sudden stone-cold flip-flop from a Republican progressive (if there is such a thing) to a full-on Republican conservative – last January – has not been overlooked by the 50% of Oregon conservatives who pay attention to politics. This November, virtually all Republicans in CD2 will vote for Donald Trump, but many do not trust the duplicitous Buehler and won’t vote at all in the congressional contest.

Third, most importantly, it’s the issues. In 2018, his sheer exhilaration in being pro-choice and anti-Trump will never be disremembered by the half of our Republican base that has been watching state politics closely. Regarding the Life issue, here’s a direct quote from his 2018 gubernatorial campaign: “As Governor, regardless of what happens at the federal level, I will ensure Oregon remains a pro-choice state.” And about being a never-Trumper, for the last four years – up until three months ago, in January – Knute Buehler has said so many hateful things about Donald Trump that it’s hard to know where to begin.

In 2017 Buehler called for a special counsel to investigate President Trump.** And in 2018 he angrily declared that President Trump should withdraw his Brett Kavanaugh Supreme Court nomination, claiming Kavanaugh was not ethically fit to be a Supreme Court justice. (Kavanaugh was ultimately confirmed after the Democrat Left’s unsubstantiated claims, which were designed to destroy Kavanaugh personally, were utterly debunked.)

All of this has infuriated a huge block conservative Republicans: the ones who have been paying attention. So, in November’s general election, if Buehler is the Republican nominee, a huge chunk of the CD2 Republican base will not vote for the man, and he will lose to the Democrat.

He could never win the congressional general election with part of the Republican base. He would need all of it…and that would never happen.

“So, it’s a simple thing: if Knute Buehler becomes the Republican nominee on May 19th, say goodbye to CD2. If we select a truly conservative nominee, we’ll keep the District Republican.” —Sam Carpenter

Born and raised in a poverty-stricken rural region of far upstate New York, my early l background is small-town working class. At the age of eleven I began work in door-to-door sales and by my mid-thirties had held scores of blue and white collar jobs. Along the way I gained a technical degree in forestry and surveying. But although my heart has a warm spot for chainsaws, heavy equipment, and hard-core construction management work, for the last 36 years I’ve been a CEO and job producer, the author of a best-selling business book, a professional business turnaround specialist, and an international philanthropist. I love the Oregon forest. It’s why I got a technical degree in forestry and came here in 1975. Read more about Sam on his website makeoregongreatagain.com/meet-sam/