Earlier this year, Pacific Power began installing throughout Oregon what are known as ‘smart’ meters to replace the long reliable and non-deadly analog meters found on homes and businesses in every state of the Union. They are finish installing Smart Meters in Jackson County. NWV was told that they will start installing the not-so Smart Meters in Josephine County soon.

There is nothing smart about ‘smart’ meters. They do not save energy. They have been responsible for many houses burning to the ground after installation as well as blowing up household appliances like microwave ovens. They are also deadly to the human body, animals and the environment.

How do I know all this? Because back in 2011 I filed the first official complaint with the Texas Public Utility Commission (PUC) which began the ‘smart’ meter war here in Texas. Texans were going to have those dangerous meters shoved down their throats regardless of whether they wanted them or not. It also meant the loss of hundreds of meter reader jobs; across the country the number is in the thousands.

Despite massive, overwhelming scientific evidence and expert opinions from individuals who have been in the field of EMF (Electromagnetic Frequency) for decades, as well as scientists and doctors stating those meters are dangerous, our state legislature, sprinkled with campaign donations from the big energy companies in the state, ignored all of it. As did the Texas PUC.

A group of us were able to raise enough funds to fight the PUC which here in Texas is just another group of unelected commissioners appointed by our governor, who at the time considered we Texans as nothing more than pesky flies.

The biggest newspapers in Texas staffed by intellectually lazy reporters who knew nothing about the issue other than what they were told to write labeled us as a fringe group of nut cases. More fools just like our state legislators because the very real detrimental effects from those ‘smart’ meters also affect them and their families.

Of course, their completely biased articles based on propaganda and lies had the desired effect for 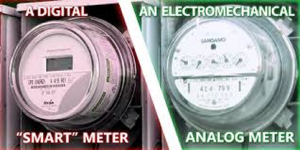 99% of the people in my state. They went back to sleep – until they started getting energy bills that jumped from $200 a month to $700-$800 a month and they discovered why those meters do not save energy.

The big “news” papers here in Texas printed one of the biggest lies from the independent, non-profit California Council on Science and Technology. The PUC sold the same lies contained in the CCSTs report to our ignorant state legislators bought and paid for by the energy companies or the ones who have ‘greenie’ tattooed on their foreheads.

That same lie was quoted in the Mail Tribune in this article: “According to the independent, non-profit California Council on Science and Technology, “There is no evidence that additional standards are needed to protect the public from smart meters.”

Here’s a news flash for the author of that article: That CCST report was thoroughly debunked and 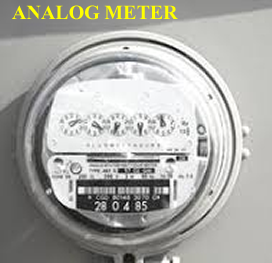 proven to be so skewed as totally worthless. Didn’t make much of an impression on the two people who died in Nevada when their homes caught on fire right after a ‘smart’ meter was installed.

As for the claim made in that article those dangerous meters are a significant distance from the occupants on the exterior of the house goes to show how little they know about the transmission of non-ionized radiation from those meters. No where is ‘net meshing’ mentioned or the fact that too many are located right outside your bedroom window or your children’s bedroom window.

Because of our persistence and shouting as loud as we could, an opt out concession was finally granted. Whoopie! To protect our health and the health of many pets who are suffering from EMF sensitivity here in Texas (and around the country), we were given the option of keeping our analog meters and paying extortion money in the form of a fee and then another fee to have a meter reader come out once a month to read the meter – something that was ALREADY being done for our analog meters.

Those opt out fees aren’t cheap, either. For trying to protect your health in Oregon you’ll pay a hefty opt out fee of $137.00 fee plus $36.00 a month for a meter reader. That’s right. Of course, the ones most hurt will be lower income individuals and family units who simply cannot afford to pay that kind of extortion and monthly fee.

‘Smart’ meters came along about a decade ago and it all had to do with dirty, unconstitutional money 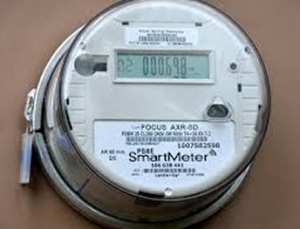 stolen from we the people by the crooks in Congress under the phony pretext of ‘green’ and saving energy. Just like the monstrous hoax called global warming and later changed for marketing purposes to climate change. All of this is explained in my columns below.

We took our case to the Appeals Court in Austin, Texas, who also ignored all the science and the will of the people of this state. By that time, we had burned through $80,000 in donations and decided it would not be possible to raise enough money to take it to the Texas Supreme Court. Why bother? The fix was in and now the good people in Josephine County and the rest of the State of Oregon are going to be exposed to the very real harmful effects of non-ionized radiation from those ‘smart’ meters.

Few Americans have any idea what’s really going on with those ‘smart’ meters and how they tie into the disaster just waiting to happen: the power grid. Congress has been warned for years what WILL happen. It’s just a matter of time.

I’ve been in the trenches 29 years and writing for Newswithviews.com since 2002. Research is what I do and below is the research and truth YOU need to know about those ‘smart’ meters. I sometimes hear people say, gee, I don’t have time to read. Really? Well, then how do you expect to get educated about what government, state or federal, is doing to you and your family? On an issue like those dangerous ‘smart’ meters if you won’t give up some of your ‘leisure’ time?

The number of hours I spent on the issue of ‘smart’ meters, trips to our state capitol (a 6-hour drive each way), the cost of gas and hotels is far greater than reading the research I’m providing you for free. I sure as heck had better things to do than have my life totally disrupted by the Texas PUC trying to shove one of those dangerous meters down my throat and the all-consuming fight that ensued.

Environmentalists – especially in the State of Oregon – screech all the time about the phony climate change ‘going to end the world tomorrow’ but very few of them have any interest in the proven facts about what ‘smart’ meters do to the environment, livestock, your beloved horses, doggies and your family’s health. Not very smart.

My columns below are filled with facts, verifiable sources from individuals with impeccable credentials and experience. We are not against new technology. We are against dangerous technology. Be sure to hit the links contained in my columns as they are equally as important.

Then let your state legislator know how much you appreciate being extorted to keep your family safe and for them putting your family’s health at risk – not to mention the privacy issue. Remember that on primary election day when the real elections take place.

My fight against the ‘smart meter’ (You don’t want one of those dangerous things on your house) August 15, 2011 by Devvy

DVD: Take Back Your Power by Josh Del Sol

Devvy Kidd authored the booklets, Why A Bankrupt America and Blind Loyalty; 2 million copies sold. Devvy appears on radio shows all over the country. She left the Republican Party in 1996 and has been an independent voter ever since. Devvy isn't left, right or in the middle; she is a constitutionalist who believes in the supreme law of the land, not some political party. Devvy is a member of the Society of Professional Journalists. Devvy's regularly posted new columns are on her site at: www.devvy.com. You can also sign up for her free email alerts. E-mail: devvyk@npn.net