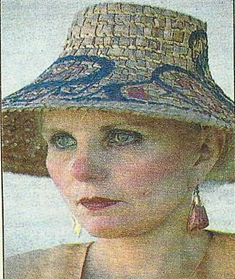 SALEM, OR. -Thousands of President Trump supporters marched through Salem, Oregon’s capital city on March 25th 2017. They did it in support of President Trump, Vice President Pence, police officers, military, veterans and first responders. These were the forgotten man and woman that Donald Trump spoke of.  Patriotic Americans who love this country. And support the man who says we, the people, have been empowered by voting for him to change the direction of our country. We are the men and women who knew that if we did not come out and vote for Donald Trump we would lose this country we love. 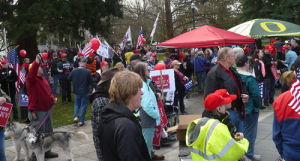 The rally begin with a prayer honoring God for giving us a land of milk and honey. Then the microphone was turned over to those in attendance to speak about what America means to them and how Donald Trump has changed their lives; how they honor those who are defending our country in the military; and to honor those brave soldiers who have served our country, the veterans; and the police officers who put their lives on the line every day to protect society; and the first responders who every day are out saving lives.

Dr. Diann Morrison-Wilson, co-organizer of the March had this to say “when Donald Trump said in his inaugural speech, “for too long, a small group in our nations capital has reap the rewards of government while the people have born the cost. Washington flourished but the people did not share its wealth.   Politicians prospered, but the jobs left and the factories closed. The establishment protected itself but not the citizens of our country. Their victories have not been your victories…… while they celebrate it in our nation’s Capital, there was little to celebrate for struggling families all across our land.”  The crowd started chanting, Trump, Trump, Trump, USA, USA, USA.

When the crowd finally quieted,

She said, “President Trump has thrown open the window of the Washington cartel, the secrecy and corruption is evident to all Americans. Our president has empowered us to take over this Country with our votes. We are their boss and they will be accountable to us, in the next election cycle.

“Look at Oregon’s capital city, our politicians are bleeding the average taxpayer, taxing them so they don’t bring much money home, large building contractors are saying they can no longer stay in business because of the high taxes;  Oregon’s politicians are also faring well, while the masses in Oregon face unemployment, poverty and a sense of isolation, while they grow big government through its PERS Program; giving freebies to illegal immigrants such as healthcare, housing, and to other Oregonians who choose not to work.

Her passion for the forgotten man and woman in Oregon was evident. She called out to the crowd, “we need each other to issue pink slips to a corrupt governor, US Senator Merkley, Defazio, ….. “. Our legislators are some of the highest paid in the nation, and they pay the government employees extremely high wages. That’s because of their

PERS Program and growing big government.  We cannot allow these politicians to continue to prosper as they shut down our timber industries, mining and fishing. They protect themselves at the cost of us citizens.”

She concluded with, “this has been an extremely successful March, for you are the silent majority,  Who have left the comfort of your homes, to take part in changing our government. Because after all, “we the people,” have a voice now in Donald Trump, who said, “we will be forgotten no longer. That we are part of millions who have become part of a historic movement , The likes of which the world has never seen before.”  “Thank you for all coming. ”

Diann Morrison, Ph.D is a semi-retired business owner. Diann joined the Lane County Republicans in 1998, being an active PCP. Since March 2015 Diann was Mr. Trump’s coordinator for Lane County. She believed, ‘If Mr. Trump was not elected president of the United States we would lose America.” Diann have been so passionate about it, that she spent endless hours campaigning for Donald J. Trump. Diann was partially instrumental for bringing Mr. Trump to Eugene for the May 2016 rally. She truly believes that, “Mr. Trump’s election for president has returned government to us, the people. President Trump received more votes in the primary than any Republican candidate in the history of Oregon.
EDUCATION;
1. University of Minnesota, Minneapolis, PhD, (7/1989) Administration, Finance & Law
2. Stanford University, Stanford, CA Doctoral work (1984-86) MA Admin., Economics., & Policy. Awarded Stanford’s Most Prestigious Honor: A Fellowship to study for a PhD..
3. University of Alaska, Juneau, AK MA :(1983-84) Master’s Public Admin.; Minor Bus. Admin.
4. University of Alaska, Juneau, AK Bachelor Science (with Honors)
5. Massachusetts Institute of Technology, Cambridge, MA (1978 summer) Studied Finance
6. University of California-Berkeley (1977 Summer) Studied Finance