Josephine County, OR. —By April 26, 2018, when ballots will be mailed in Oregon, YOU are being asked to vote. The biggest problem is that people simply don’t vote. “Lack of voter turnout” is a huge mistake. It’s why we have bad leadership. So many elections have been won or lost by simply one or two votes. Please make sure you return your ballot before or on May 15!

We have some serious considerations in the election of a new County Commissioner in Josephine County. Simon Hare is vacating his seat which presents a rare opportunity, an incumbent- free position. This is for Position 1. 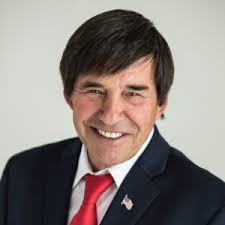 Eight candidates chose to put a statement in the voter’s pamphlet. Ron Smith, strongest in the field of candidates, has been campaigning since November. He has been meeting with all the clubs, and citizens groups in and around Josephine County speaking about his unique qualifications for this position. For several years Ron has been involved in Land Rights. Ron believes in small accountable to the people government. Ron also believes that your tax money must be spend wisely.

Ron has also attended the Oregon and California (O&C) lands meetings, at his own expense, while the County has paid for our elected representative, appointed to that body, to attend meetings. Ron has been keeping track of what is happening with all issues involving our land rights. This is far and away one of the most important issues in Josephine County. This issue involves the ability or the lack of ability of our County Government to properly fund its various responsibilities. As was pointed out in a recent Commissioner’s forum, the property taxes go to support many things but only 58 cents goes to support the County Operations. Other funding comes to the county from various sources, including the .08 Animal Control levy and now the Safety Levy passed recently.

A goal long held in Josephine County is to fund our local government with money owed to us by a federal government that has not lived up to their commitments in the O&C Lands Act. Aside from being the most knowledgeable candidate on land issues and funding sources, Ron Smith also believes that all the required Josephine County services can be paid for without raising taxes. Instead of watching our forests burn, Ron believes that good forest management can provide the needed funds to meet the needs of Josephine County. The Federal Government still owes JoCo the “in lieu of taxes” money that they agreed to when they took possession of 67.92% of the land in Josephine County. (Lawsuits pending.)

Aside from leading the field in knowledge about our land issues, Ron Smith has received the Endorsement of the Oregon Right to Life PAC. He has been involved in the Christian ministry leadership, is a former business owner and is a Native of Josephine County.

It is important to have commissioner’s who uphold the integrity of the office. We have seen in recent years, some who have embarrassed our County, some who’s actions have been questionable in making some decisions and have been reprimanded by the State Ethics Commission. We need a candidate with a moral compass.

Then there is the looming Elephant in the Room question of “do we want the city to run the county?” There are candidates that currently hold City Council and Mayor positions that are running for Position 1, who both claim to have the heart to serve our County. Mostly, though they have had the experience of serving the City of Grants Pass. It really isn’t a “us or them” situation, as all Grants Pass Residents are members of Josephine County. However, the City of Grants Pass has their own City Council, budget, police force, public works, etc. The County has their own “budget”, the Sheriff’s office, and their own public works, etc. The City has far and away been more generous with tax measure approvals than have the rural County dwellers.

There are many reasons for that, too many to go into here, maybe a whole article later could delve into that territory. However, the County dwellers have been hit with a recent tax for public safety that didn’t sit well with them because mostly the people in the city voted for it. At any rate, four tax issues passed in the last election. It seems clear that the County dwellers would rather have someone from the County represent them. Well, they better vote for that then, and not lose their ballot or forget to send it in, now is the time to stand up and do your part to keep your county how you believe it should be.

At a recent Democrat Party meeting where their candidates were presented to the attendees, others could be seen, such as Pastor Jim Brumbach with his man former City Councilor Ken Hannum. Pastor Jim Brumbach from River Valley Church also got Simon Hare, City Councillor Lilly Morgan, city councilor Dan DeYoung elected and now he wants another city councilor elected. While on the city council Ken Hannum was unhappy with last year’s failed sales tax proposal because it was to small, he wanted a bigger tax proposal with more money. See Ken Hannum in a video below.

Vivian Kirkpatrick-Pilger who you would not usually see in a Democrat meeting, appeared to be on a reconnaissance mission. A few other Republicans popped in to take a look, (but didn’t stay long) and they found a highly engaged group. The Democrats have a very motivated crowd, along with a County Party Chairman that seems full of life and pushes the envelope. Over the last couple of years they have recruited about fifty new PCP’s (they only had 17 PCP’s until recently) as compared with 130 PCP’s in the Republican camp. The room was crowded and the Dem Chairman asked the PCP’s to raise their hands, and it looked like all of them were there, enough hands to cover the current count anyway. Looks like they are looking for a Blue Wave in JoCo. They are very Progressive, and this writer was surprised they just call themselves Democrats instead of just “Progressives”.

We need solid conservatives in the County to get off their hands and start raising them, or stand up and be counted. We can start with electing a real Conservative to County Commissioner Position 1, Ron Smith. Ron Smith’s mission as Commissioner will be to look out for the people.